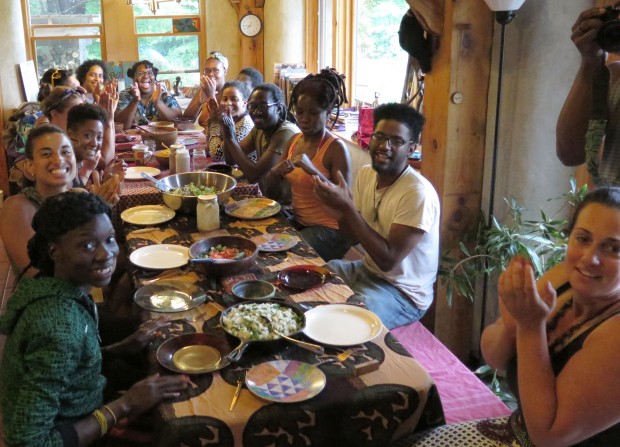 I had the privilege to join the first Black and Latino Farmers Immersion at Soul Fire Farm the first week of July.  I must say it was truly a journey for me as I planned a menu with Leah and Jonah. I am thankful they let me join the group. I was reminded about our deep need to connect with the land. We got food donation from Honest Weight Food Co-op that made it possible for me to cook several Brazilian dishes for the Immersion.  I cooked foods that I have never made for and with others outside my home. When I share foods that are full of meaning to me, I long to share a story too. My goal was to cook with little waste as possible, using the whole vegetable as well produce that was not “perfect.” As I cooked black beans this time, it was not the recipe I would have made called Feijoada, the national dish of Brazil, with meats; not even the vegetarian version. I read that Feijoada may be just a romantic story I learned as a child. I reflected on the legend of how the slaves may have cooked it, by simmering black beans with leftover meats from the big house, so we added what we had at hand, careful not to waste precious produce.  My hope is that these conversations and skill sharing opportunities teach us not only how to cook but are reminders of how much waste goes into the landfills while so many experience food insecurity. 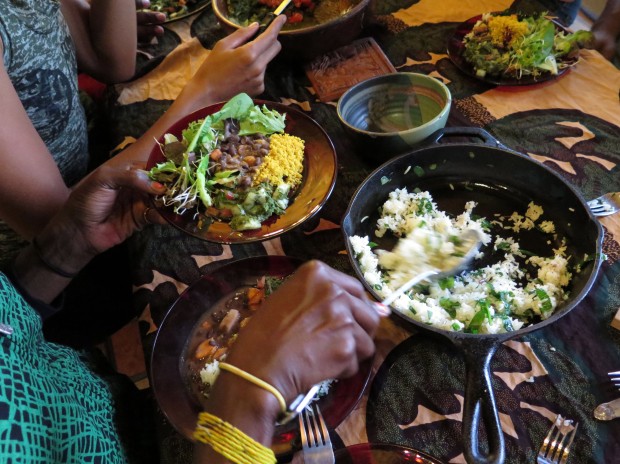 What was different at the Immersion’s table, was that this was the most welcoming group. They listened and tried everything I cooked with an open heart. Soul Fire Farm is a safe place and we ate food made with love, from each others’ hands, and tasted the terroir of amazing food grown from under our feet. We ate with gratitude and intention. We ate wholesome foods! Special thank you to Leah Penniman for allowing me to publish her essay to this post as she poetically reflects on the week.

“Black and Latino Farmers Immersion was a little peek into what is possible in a mended world.”

Following her essay are the menu and recipes. Thank you to Capers Rumph for sharing some of her beautiful photos.

“Land is the only real wealth in this country and if we don’t own any we’ll be out of the picture.”

We are an uprooted people. Our ancestors were stolen from land in West Africa, forced off of land in Mexico by NAFTA, driven off of land to take up the Trail of Tears. Some of us re-rooted. For 400+ years we tilled the red earth of the American South and we joined the ranks of “foreign-born” agricultural workers building the foundation for this country’s wealth and power. We knew the land and belonged to the land, but the land did not belong to us. Brutal racism – maiming, lynching, burning, deportation, economic violence, legal violence – ensured that our roots would not spread deeply and securely. In 1910, the height of Black land ownership, 15 million acres (14%) of farmland was owned and cultivated in our community. Now, less than 1% of farms are Black-owned. Our ancestors were forced, tricked, and scared off of land and joined the 6.5 million Black people in the greatest migration in American history, the migration to the urban North.

We were a land based agrarian people from Africa. We were uprooted from Africa and we spent 200 years developing our culture as black Americans and then we left the South. We uprooted ourselves and attempted to transplant this culture to the pavements of the industrialized North. It was a transplant that didn’t take. I think if we had stayed in the South we would have been a stronger people and because the connection between the

The Black and Latino Farmers Immersion at Soul Fire Farm is a humble attempt to rewrite part of this story, to reclaim our ancestral right to both belong to land and have land belong to us. The knowledge of the earth is written into our DNA. The trendy skills of sustainable living – canning, work parties, urban chickens, natural building – are not at all new. Monica White’s book “Freedom Farmers” explains how Black Southern farmers cooperatives kept alive these ancestral ways of knowing and honed them into a specific art. This past week at BLFI, we did our part to revive this knowing.

Aspiring growers joined us from local Troy and Albany and as far as California and Florida. Each person placed incredible trust in us and the process, many camping for the first time, eating whole-food version of Diasporic cuisine, working hard in hot sun and dreary rain, and engaging in deep personal reflection that allowed uncomfortable and new feelings to surface. It was, as one participant put it, “the best thing that ever happened to me.”

After an orientation where community agreements were established (e.g. do not make assumptions, show up fully…) we established a routine that married flexibility with clarity, grit with introspection. Each day, beginning at 6:30 AM we got our hands on the land. There were 3 hands-on blocks per day, ranging from 1-3 hours – a gentle introduction to the corporeal rigors of farm life. We took time to explain the how and why of each task and shared a great variety of experiences – harvesting, CSA packing, chicken care and rotation, mulching, tool weeding, hand weeding, bed preparation, tomato pruning, pest management, direct seeding, and transplanting. Anticipating the emotional fatigue of the group heading out to weed for the 3rd day in a row, I reminded us of the difference between earth’s economy and capitalism. In contrast to the linear nature of capitalism, a life bound to the earth is cyclical. We pick the weeds and they grow again and so we pick them again, on an on, for all our days. And we find beauty and presence in the picking.

There were still learning spaces as well. During the longest work block we would break for a field class. During this time, we addressed natural building, orchard planning, tractor basics, and herb cultivation. Jonah did a beautiful job balancing times when it was correct for him, as a white person, to step forward and share knowledge (e.g. tractor class) and when to let others share their wisdom and expertise. During some of these blocks he led conversations with the other white allies, Lyssa and Capers, about their role in ending racism. We also had wonderful contributions for guest facilitators, including Naima and Adaku’s midday movement break where we shared yoga, improvisational dance, and Thai massage. I offered an afternoon class on farming theory, which included crop planning, Black land history, and soil fertility management. Finally, as the sun waned, we held space for deep personal reflection. Beatrice led us in sitting and walking meditation. Adaku brought us lovingly through a forest labyrinth wherein we were prompted to engage with our senses and our hearts. Tonya led us in a healing hum circle that dissolved into giggles and I offered a ritual herbal bath with a meditation on the beauty and completeness of our unadorned selves. The forest and pond provided our temple and kissed us with rain mist.

Abundant, whole-foods meals punctuated the day, prepared by rotating groups of participants with resident and guest chefs and featuring items from our respective homelands – Dominican Republic, Haiti, Brazil, Puerto Rico, Nigeria… We packed tightly around two tables and held the space with rousing, percussive gratitude songs and mildly chaotic passing of plates and food. Guest Brazilian chef Ellie Markovitch magnetized us to the kitchen with her deep reverence for food and the stories it holds. She also taught a class on whole foods preparation, during which, even the children Neshima and Emet were taking eager notes.

Throughout it all, there was a magic that cannot be captured in words. At one gratitude circle, Emet stammered, struggling to offer his thanks precisely and settled for, “I just feel so intertwined with you all.” It is true. During soils class, one participant offered a metaphor to help me explain cation exchange capacity, which compared Wu Tang Clan (high CEC) and Mos Def (low CEC) and the knowing, appreciative laughter said it all. “I see you.” The sense of family was so safe and palpable that Jonah found himself reading the speech he wrote for his brother’s wedding, which compared mulch to love. It was such that when Adaku and Lissa had to leave early, the entire group surrounding them, singing Stevie Wonder in harmony, collapsing into an “everyone hug.” It was such that, even as rain soaked bedding and cell phones, folks did not flinch – choosing love and joy over stress. It was such that the tears flowed freely at the final close and even waiting for the bus in the parking lot, we could not help but to dance.

Black and Latino Farmers Immersion was a little peek into what is possible in a mended world. Our people were once traumatized and confused, I believe. We mixed up the oppression of racism and named it the Land herself and strove to divorce ourselves from Her in an effort to get Free. But, without the land we cannot be free. Henry Kissinger said, “Control oil and control the nations; control the food and control the people.” When we get together in our dignity and power, own our means of survival, make decisions about the food system, learn to grow the food that nourishes us, cook for one another, and heal with one another – we return to wholeness. 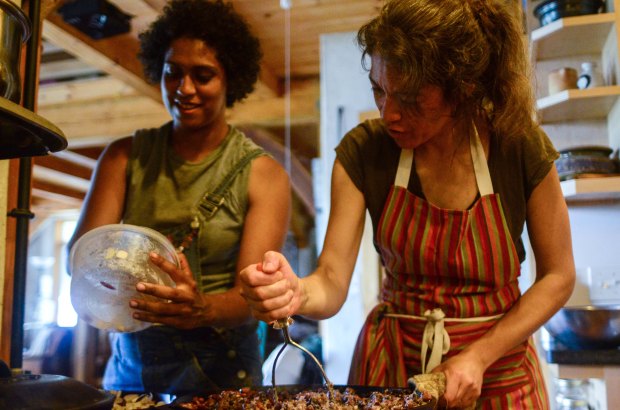 but the corn we ate raw in a corn/parsley salad 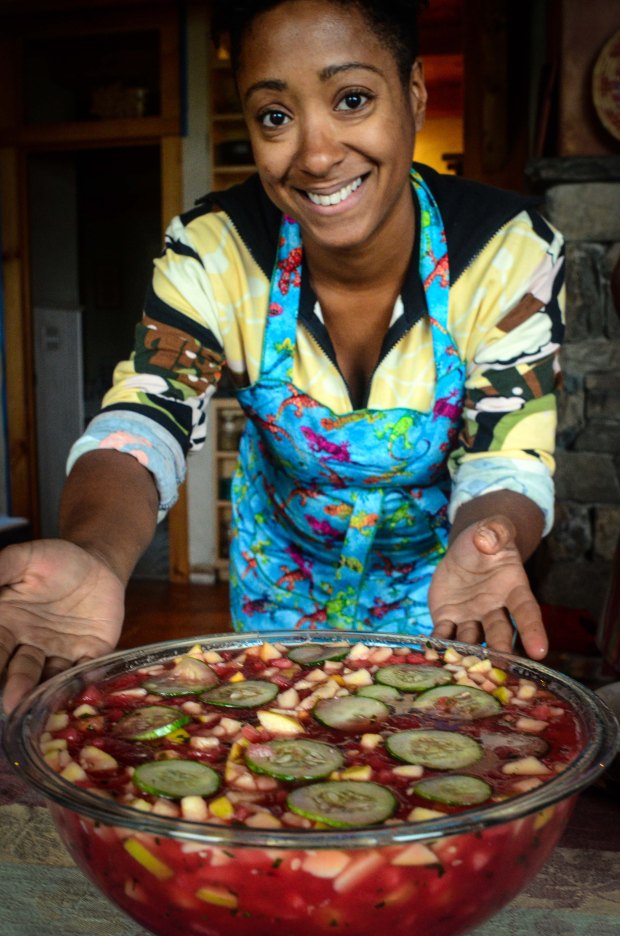 making Virado, which translate “Turned”.  Cook bananas in oil or butter, add whisked eggs, continue turning until cooked, add grated cheese, turn until melted. When the dish comes out of the sides, finish with toasted Yucca flour to taste–serve hot

Blend together the potatoes, carrots, liquid, lemon juice, vinegar, salt and black pepper until smooth. Stirring constantly, add the oil slowly, until you get the consistency of mayonnaise. Sprinkle paprika to serve.

Cook in a pressure cooker for 20 minutes according to your pot instructions or until tender or slow cook crock pot low for 8 hours.